Update on the potato box

A while ago we made a potato box. 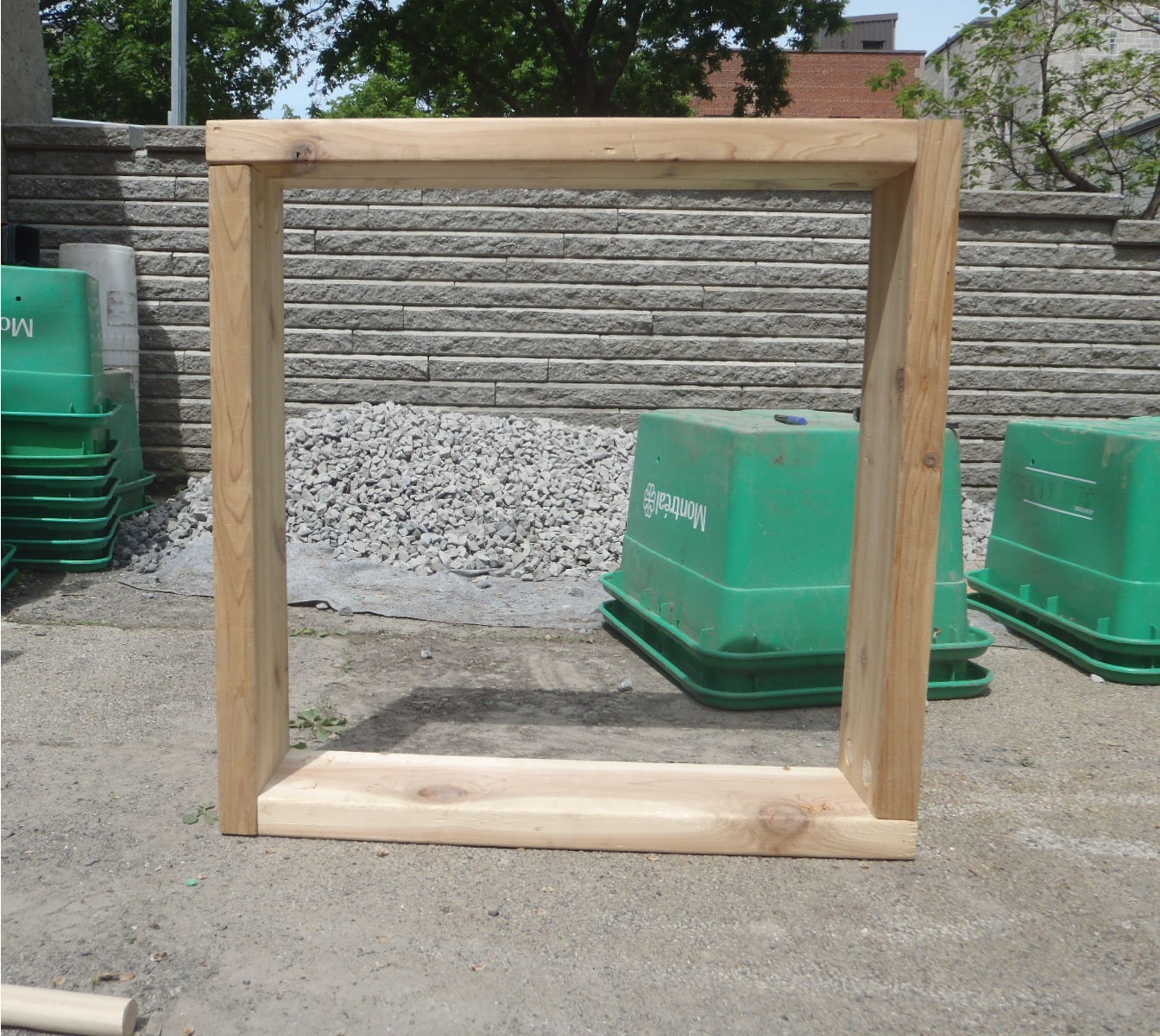 In the meantime, one of our member got told by a friend that our design for the potato box was good, but that screwing in the end grain of the wood (like we did) wasn't recommended. The solution is to add wood plugs perpendicular to the grain so there is some cross-grained wood for the screw to hold onto, which is what we did with our limited skills and equipment.

For this we used wood dowels of 1" of diameter that we cut into 1½" plugs. A smaller diameter may be better; it probably depends on the size of the screws used. In order to insert those plugs, we needed to drill the holes, so we used a hand drill with a 1" spade drill bit...

...although the only bit we had at hand had a very long shank and was a bit overkill for the job (and potentially dangerous, quite frankly). A drill press would have been ideal for this kind of work, especially since drilling a 1" wide hole in cedar is quite demanding and can exhaust the battery of a hand drill quite rapidly. 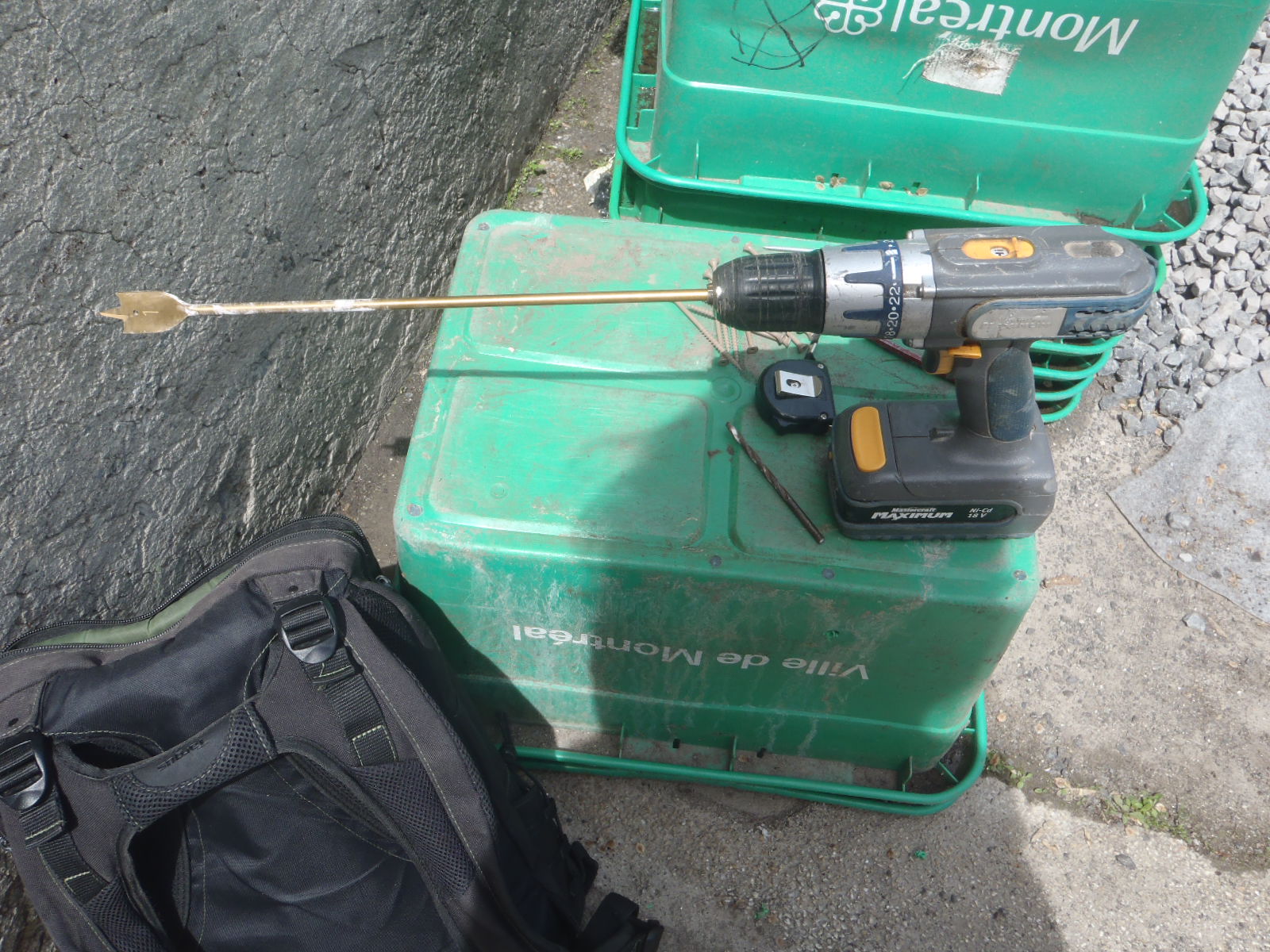 But first, in order to make sure we'd drill as straight as possible (and at the right place), we drilled pilot holes where the center of the larger holes would be.

And then we could saw the dowel into plugs and insert them in the holes. We're not sure what kind of wood our dowel was, but it clearly wasn't cedar, and probably not hardwood of any sort. This might be a problem for the durability of our potato box. Time will tell. Fine observers may have noticed that the screws were not screwed in their original holes. That is partly due to the fact that the wood plugs were not all in the path of the original screw holes, and also because we screwed up (haha!) and put the plugs too far to be reached by the screws we originally used (2½" screws). So we used longer screws and made sure they would go through the plugs. 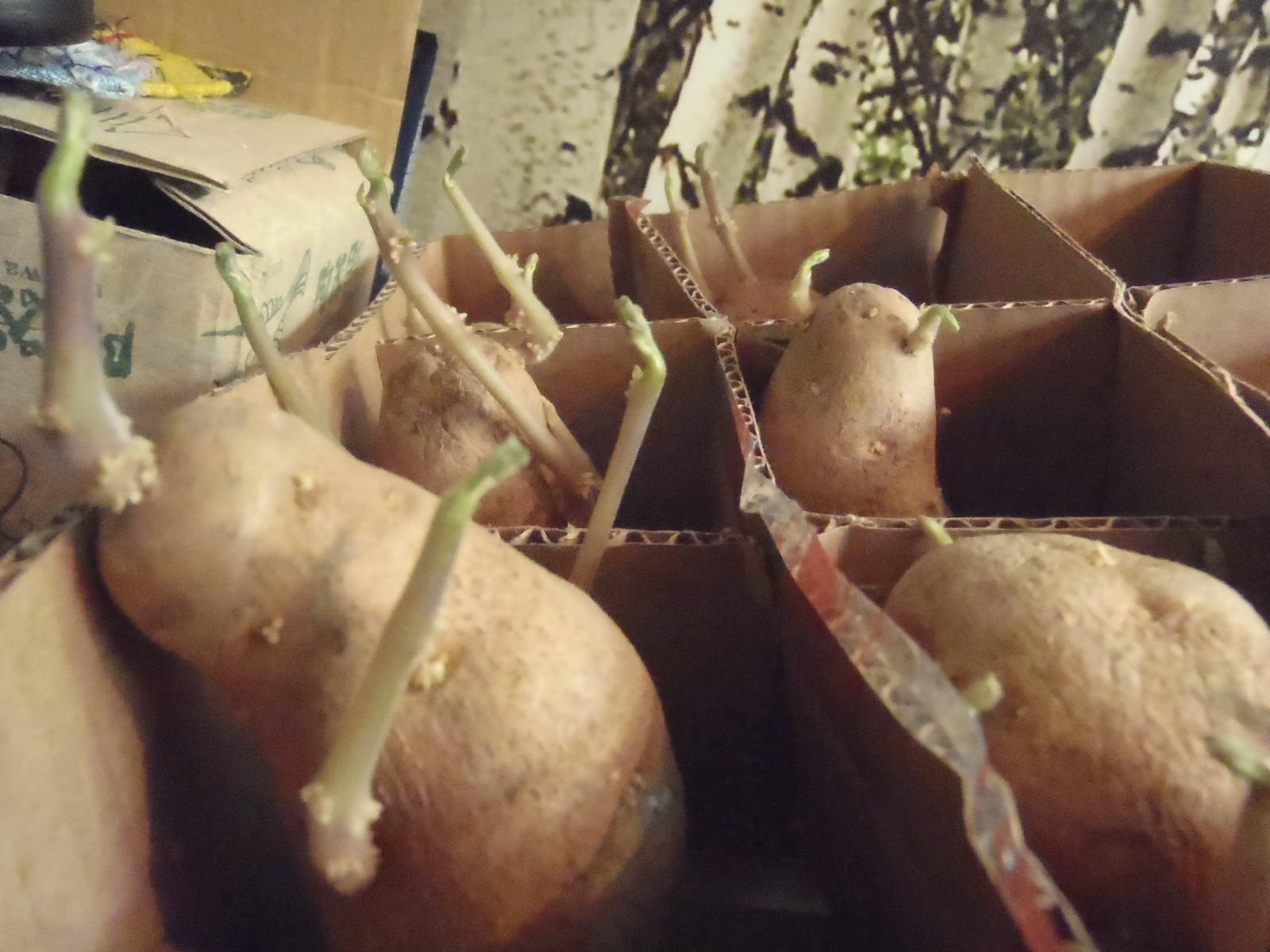 We forgot to tell you about this earlier, but we have potato seedlings in progress. Although potatoes can be planted as unsprouted tubers directly in the soil, one can get a head start by starting them as seedlings. This is convenient when, like in our situation, planting is delayed.


Potatoes, unlike other crops, can be grown using any potatoes you buy at the store or the market (potatoes from your local farmers' market may do better in your region, though). Beans bought at the store, for example, are treated with some anti-sprouting agent. If you are able to buy dried beans directly from a farmer, though, they should be able to sprout (don't make my word on that, though).


To start potato seedlings, place the potatoes in an egg carton with the scar of the stem at the bottom. If you don't eat eggs, you can place them in anything else that will hold them upright (for example, below, a makeshift cardboard-thing). Place the tubers in a dry, warm and dark place, although a bit of indirect sunlight is not a bad thing.

At that point, some suggest rubbing off all the sprouts except the three or four topmost ones to concentrate all the energy of the potato in the production of healthy seedlings, while others suggest to let the tuber be and then, at the time of planting, to cut the potatoes in pieces containing 3-4 sprouts each. You're the boss, applesauce. If you do cut them in pieces, though, make sure to do it a few days before planting, in order to allow the potato flesh to dry; this will reduce risks of rot or diseases.