Last November 25, Campus Crops decided to build ourselves a nice potato box for next year. The idea came from this nice article at Tip Nut about growing 100lbs of potatoes in 4 square feet (which means nothing on its own; they probably meant 12 cubic feet). The article provides an interesting way of doing it with a wooden potato box (below), which allows the gardener to rob* the quantity of potatoes they want, at the best location in the box and at any time they want without disturbing much the rest of the installation.

Growing potatoes vertically uses the same procedure no matter what method is used: start with around 6 inches of soil and some potato seeds (i.e. pieces of potatoes with 2-3 eyes that started sprouting), water and take care of the plants until potatoes start poking out of the soil, add enough soil to cover the potatoes while making sure not to go above a third of the height of the plant, water and make sure everything is going well until more potatoes poke out of the soil, and so on until harvest.


Potatoes can grow in about any soil as long as it is well-drained, otherwise they might rot (especially the ones at the bottom). Making sure water can get out easily at the base of the container and choosing airy soil are important for good drainage. Potatoes can grow well in denser soils with less good drainage, such as clayish soil, and will help break the soil in deeper layers, but more attention needs to be given to watering in that case (higher risks of rot). Compost or other fertilizers can be a good addition, but they're not essential unless you want a really good harvest of potatoes. A simple tip for fertilizing is to mulch the potato plants with straw or grass clippings after each addition of soil: the mulch layer will prevent weeds from growing and will provide nutrients to the spuds as it decomposes. Another important thing is to remove the flowers from the plant, as it makes better potatoes.


Potatoes can be harvested as needed or all at once. With good timing, one can also harvest baby potatoes, which are excellent for salads. The final harvest happens when the plant is completely dead: that's when potatoes are at their best. Depending on the climate and the variety, there can be more than one harvest per year. Some people said over the Interwebs that their potatoes keep very well over the winter in the soil they've grown in, providing the soil is kept dry and somewhat protected from heavy frost. Again, it depends on the local climate; your call.

At Campus Crops, we'll harvest all the potatoes at once, so we've designed our potato box accordingly.

We based the design of our box on the one pictured above. But since we'll only have to harvest once, there's really no need for us to be able to remove a single plank at a time to rob a few potatoes. Although this way (plank by plank) of making a potato box allows for great flexibility and probably comes up being very useful to remove rotting potatoes before it spreads to other spuds, the wood gets worn out more rapidly by repetitive screwing and unscrewing.


For easier use, we decided to make squares with planks (2 in. x 6 in. x 2 ft.) that would not need to be screwed or unscrewed anymore (until they start rotting, at least). This was also easier for planning things out as the squares are made of wood pieces of equal lengths, which is not the case for that other design shared on Tipnut.


We decided to make a 2x2x3 feet box (same dimensions as Tipnut's), so we made 6 of those squares (each one is roughly 2 ft. on each side, and six times 6 inches gives 36 in. or 3 feet in height). Just like the model above, we used 2x2 inches posts that we screwed at each corner of one square.


And voilà! Now we just need to slide a square down the posts each time we add soil! 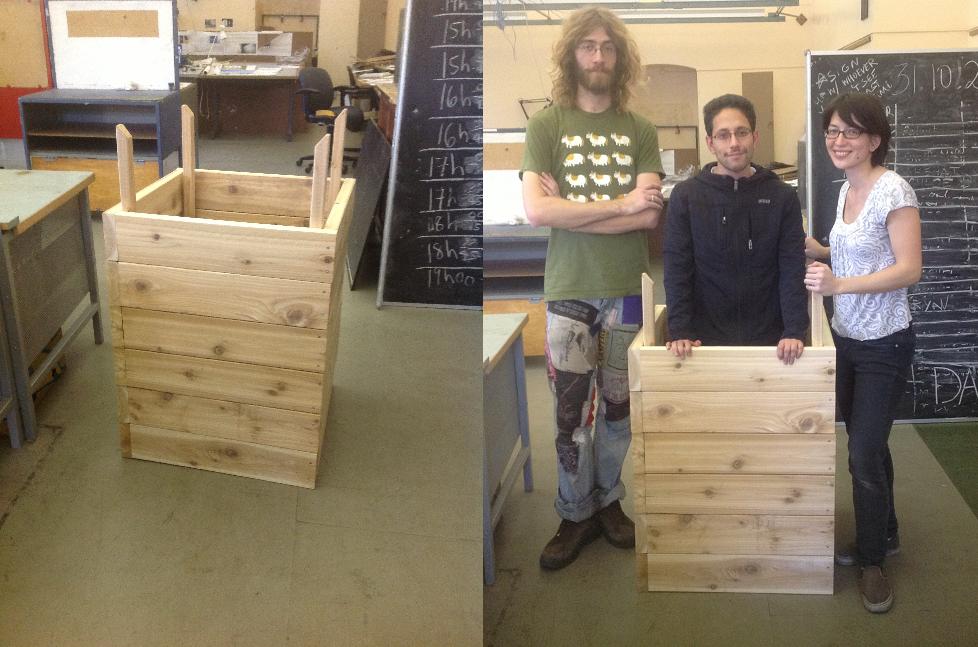 For the sake of durability and non (potential) toxicity, we used untreated cedar, which is known for being both a) natural and b) much more resistant to rot than other essences of wood (up to 20-30 years for cedar heartwood, but I doubt we have heartwood, so probably 5-10 years if we take good care of it).

There is a great variety of ways to grow potatoes that way, most of which need less work than building a potato box. For example, it's now a common trick to stack tires for potato vertical growing. Others also stack old plastic pots with their bottom cut. Planting pots are thrown away in large amounts by many greenhouses, tree nurseries and the like. Another popular method is using bags (any type, plastic or other material): after piercing holes at the bottom to ensure good drainage, the edges can be rolled down to a bit less than a foot high, the first layer of soil added with the potato seeds, and then it's just a matter of rolling up the edges as soil is added on top of the potatoes.

*Apparently, for potatoes, we say harvest when the whole plant is harvested (and thus killed) at the end of the season (i.e. the main harvest), and rob when only some potatoes are taken from the plant before the main harvest and the rest is left to grow.
Posted by CampusCrops at 9:57 PM No comments: