One of the great ironies of our times is that people who don’t know how to grow food can eat to their satisfaction all year long, while other people, who possess such knowledge but have no access to land, are unable to grow their own food and must live in a constant state of precariousness. It’s become common knowledge that the agrarian methods inherited from past agricultural revolutions are ravaging ecosystems and the land we rely on to feed ourselves. What people don’t necessarily know, however, is how the gigantic system controlling every step of production and transformation of food has also destroyed the lives and cultures of thousands of people and communities across the world. 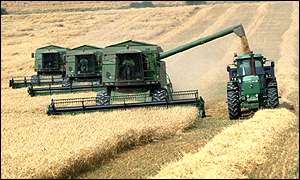 Although the main idea behind today’s agrarian practices dates from the mid 18th century, when open-field systems and sustenance agriculture started being replaced by enclosed lands and land ‘improvements’ (from the old French ‘en pros’, meaning ‘for profit’), the so-called ‘Green Revolution’ and later major agricultural ‘improvements’ accelerated the deleterious effects of our agricultural methods. High yielding varieties (HYVs), large-scale mechanization, inorganic fertilizers, pesticides and herbicides (all made from fossil fuels), and more recently GMOs (genetically modified organisms) and factory farming, have contributed or led to greater pollution, increased fossil fuel dependence, climate change, soil exhaustion, loss of biodiversity, and more. HYVs are an excellent example of an ‘improvement’ gone bad. HYVs necessitate more water and fertilizers than do crops suited to their local environment and are grown in sub-Saharan Africa, where water can be scarce and soil easily exhausted. The environment in which modern agriculture is pursued is not necessarily ideal; as a direct result of neglecting the original landscape and its capacities, the application of modern agricultural techniques in these environments is detrimental to the ecosystems.


The constants throughout the agricultural changes outlined above are the commoditization of food, a disregard of ecology, and the imperatives of the capitalist market, namely competition achieved through productivity and economic efficiency. When food (or anything else, really) becomes a commodity, what is grown, who grows it, how it’s grown, and even who gets it doesn’t matter anymore: food is reduced to its exchange-value and the aim switches from feeding people to maximizing profits and supplying demand (of course, only people with money or people part of a money economy count as ‘demand’ in the global market). In order to do this, input costs, like labor- and time-related costs, are reduced and outputs are boosted using some of the ‘competitive innovations’ mentioned above. For example, input costs could be reduced by lowering the workers’ salary or using strong herbicides instead of weeding. The outputs can be increased by using GMOs that store longer on the shelves, allowing for longer transport where the produce might sell at a higher price, or by planting cash crops, which are highly subsidized staple foods that can be sold abroad at a high price. Food is no longer just a sustaining element, rather, it is a source of profit.

The capitalist market economy is tied strongly to food and is tough to escape from, even as an individual. An average person, for example (as much as a person can be ‘average’), will need to eat. In order to do so, they can either 1) sell their labor power on the market, which makes their access to food (through access to jobs to get money) dependent on the market, or 2) grow their own food. If they decide to find a job, the resulting situation of depending on money to feed oneself is a problematic one for most people on the planet. ...So if they can’t buy the food, they should grow it! However, if they decide to grow their own food, they will need land, and land comes at a price. Even if they are able to get enough money together to purchase land, they must pay land taxes annually. In order to keep up with expenses, the farmer will have to abandon sustenance agriculture for market-oriented agriculture in order to make profit. This means they are dependent on the market. Because of their low competitiveness compared to big producers, independent farmers can almost never survive long before having to bow before some agri-business. HYVs, GMOs, and cash crops, along with their flock of inorganic chemicals, become the name of the game in order to stay competitive, otherwise someone else will take your place.

Obviously, something is not working. It seems strange that no one can have access to land for their own needs, unless they participate in the greater market and economy in order to keep their land. And what about the fact that we can’t decide what we grow, how we grow it and where it goes? Food security is not possible when access to food is inevitably mediated by the market. Food sovereignty is as important, if not more important, than food security. Giving communities the opportunity to grow their own food and have control over which crops and agricultural methods they use according to the local climate and needs would alleviate their forced dependence on the countries and corporations of the ever-great Western/dominant world. Maybe we should do this.

People are connected to the land in their lives and cultures, and food plays an important role. The capitalist economy undermines both the society and the environment that form its basis. Capitalism also alienates society from the environment, and is therefore a problem, not a solution. Food-related issues like racism and irresponsible use of ‘resources’ are however not unique to capitalism and have existed before its rise. Still, because it has been built upon and has historically thrived on aforementioned injustices, capitalism is a wall between us and potential solutions: it needs to go.
Posted by CampusCrops at 1:54 AM